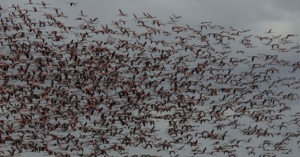 In a joint initiative, eight Portuguese environmental organizations brought the Portuguese government to court in order to prevent the progress of the Montijo airport construction project. SPEA, ANP/WWF Portugal, A ROCHA, FAPAS, GEOTA, LPN, ZERO and Almargem, with the support of the international environmental law NGO ClientEarth, filed an administrative action before the Administrative Court of Lisbon for the annulment of the Favourable Environmental Impact Statement issued by the Portuguese Environment Agency (APA).

The organizations argue that the Portuguese authorities did not properly consider the impacts that the proposed Montijo Airport would have on the Tagus Estuary, a protected natural area at national and international level, and on the surrounding populations. They also point to the fact that no joint impact assessment has been carried out throughout the Lisbon region, related to the extension of Humberto Delgado Airport together with Montijo complementary airport, due to lack of Strategic Environmental Assessment. They also consider that the project ends up jeopardising the region’s own sustainable socio-economic development.

Birds and protected habitats in the Tagus will suffer permanent impacts if the airport is built. The safety of aircraft, people and birds will also be threatened due to the risk of collisions between birds and airplanes, while the health of people and natural spaces would be affected by increased pollution resulting from increased air, road and river traffic. It is also estimated that more than 10,000 people will be significantly affected by high noise levels.

The Portuguese authorities did not carry out a credible environmental impact assessment, and instead proposed simply “trying to move” the birds that would be affected and offset the negative effects of the airport by recovering marginal areas of the Special Protection Zone. The proposed compensation and mitigation measures for the impacts on the avifauna and the protected area are, in fact, to cover up the systematic failures in the conservation and management of this area, a responsibility that the country assumed because of the national and international importance of the estuary.

The project has been highly criticized nationally and internationally. In Portugal, the public consultation of the project had close to 1,200 individual and collective participations, of which only 10 were clearly favourable. Internationally, nearly 40,000 people have signed a petition against the project, launched by BirdLife Netherlands, concerned that the airport poses a serious threat to the Dutch national bird: black-tailed godwit Limosa limosa. This species is protected by law in European, and its Dutch population, which has been the target of enormous conservation efforts in that country, passes through the Tagus estuary on its annual migration.

“As we consider to be the trampling on environmental laws, the health risks for local populations and the risks for crew and passengers who would fly from Montijo, A ROCHA had to join with SPEA in this legal process”, says Marcial Felgueiras, Executive Director of A ROCHA.

“Montijo Airport may have consequences far beyond the Portuguese borders. Not considering these consequences will cause irreversible damage to nature, people and the climate far beyond the Tagus estuary,” says Soledad Gallego, clientearth’s attorney. “The Portuguese authorities did not consider that this project would adversely affect the integrity of this irreplaceable wetland: a clear violation of EU and national nature protection laws, which cannot go unpunished.”

With this action in court, the environmental organizations hope to definitively correct an error of the Portuguese government, which would have enormous impacts on global biodiversity, the quality of life of populations living in the region and the country’s image.

Organizations that filed the action in court