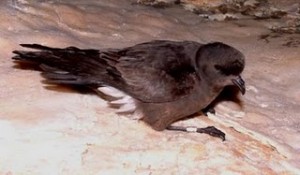 The European Storm-petrel (Hydrobates pelagicus) is the smallest and most mysterious of Europe’s ocean-going birds. It spends its life out at sea, only coming to land to breed. It builds its nest in crevices on rocky coasts or small islands. Petrels are known to migrate across massive distances. The young birds stay around in the Southern Hemisphere, and thereafter wander along the coasts of Africa and Europe looking for prospective breeding territories.

Every year, since 1990, A ROCHA team members camp for the night on a cliff, on the Algarve coast, to undertake the study. By 2013, A ROCHA had already captured, studied and released about 5900 petrels of which 3.6% had been banded elsewhere.

This research project, under the responsibility of Dr. Rob Thomas and Dr. Renata Medeiros of Cardiff University, with whom we collaborate, studies how climate change may affect the survival of the species in relation to the surface temperature of the sea water and the availability of food. 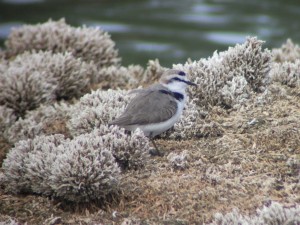 The Kentish Plover Charadrius alexandrinus is a small plover that has been seen widely around the world, along coastal areas, beaches, and salt marshes.

There has been a dramatic decline in world populations of this species, largely because of human interference, especially in coastal areas, their main breeding habitat.

In Portugal, a considerable breeding population of Kentish Plovers has been found, with an estimated population of 1200 to 3000 pairs. In the Alvor Estuary, it is estimated that there are less than 54 pairs in habitats such as sand dunes, salt marshes and saltpans.

A ROCHA first started monitoring the Kentish Plover breeding population in the Alvor Estuary in 1992 and, since then, a number of major studies on these birds have been carried out during the breeding season by students and volunteers.
These studies were designed to find out more about the factors that influence Kentish Plovers in selecting a nest site and which determine hatching success. 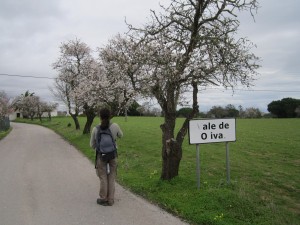 Changes in land use and their impact on ornitocenoses

Over recent years, soil use in Portugal suffered accelerated changes due to the level of agricultural intensity, urban expansion, destruction of native forests or abandonment of agricultural use.

In the specific case of the Algarve, the transformation of rural land into urban land, particularly along the coastal strip, contributed to a loss of habitats and potentially reduced biodiversity.

The presence of birds is considered a good indicator of biodiversity status, particularly in rural areas, and it has been adopted even by the European Union as a way of monitoring biodiversity.
Since the 1980s, A ROCHA records information about the birds found in the Alvor Estuary.

This data will be used as an object of study in this project to analyze the different levels of landscape changes that occurred in the last decade in Western Algarve. 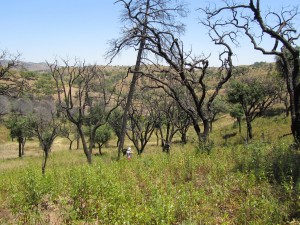 Fires are a natural constant in Mediterranean ecosystems and their importance in the vegetation dynamics is widely recognized. However these ecosystem changes affect the abundance and efficiency of pollinators.

The ecological recovery of a system implies the restoration of plant-pollinator interaction, so this can serve as an important bio-indicator to compare reference communities with communities that have suffered disruption.

This study aims to evaluate the recovery of plant-pollinator interactions after a fire in a selected area of Serra do Caldeirão, close to São Brás de Alportel. Areas that caught fire in 2012 will be compared with intact and built-up areas with pollination networks, with particular emphasis on nocturnal butterflies.
This project will allow us to build multiple ecological pollination networks between undisturbed sites and sites that suffered disturbances caused by fire and determine which are the most important pollinators.

Lastly, it will be possible to evaluate the importance of interactions between plants and pollinators as indicators of stability and resilience of ecosystems.